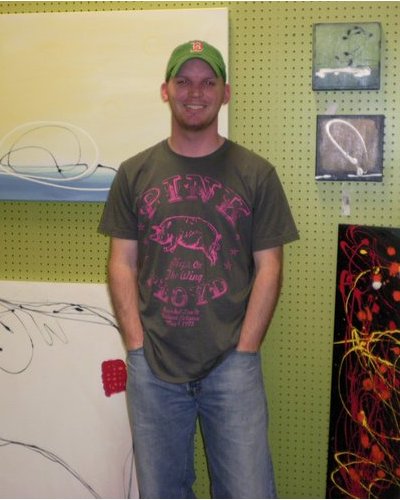 Luke grew up in Dallas Center and graduated from the University of Northern Iowa. He currently resides in Ankeny with his wife Jennifer.

The couple owns a new home, one that has a lot of blank wall space. So Luke set about making paintings to fill those walls.

Friends and family were taken by the décor. “It just makes me feel good,” said one.

Indeed, much of Luke’s work is very emotional. Painting offers him a break from the tediously detailed pen and ink illustrations he’s spent much of his life creating. In brushes and canvas, he can just cut loose and give form to pure energy and aggression.

But there is a method to the madness. He logs ideas every day, making sketches and doodles that seem to have a bit of magic in them.

Then, with the blank canvas calling him, he begins.

When he’s painting, he seeks balance in color, shape, and lines. He’ll work (and rework) some canvases over and over again until he’s sure the feeling is right for the moment. In those bursts, when everything seems to flow, the paints have minds of their own, guiding Luke, instead of the other way around.

When the act of creation seems like a direct connection to a deep emotional well, when the brushes seem to be the ones in control, that’s when Luke is happiest in his work.

That other people seem to get a kick out of those colors and lines adds immeasurably to his joy.